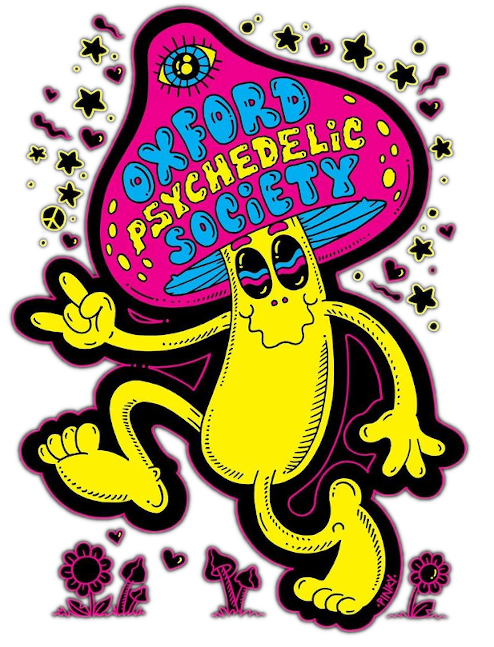 Welcome to the Psychedelic Society of the University of Oxford. We organise talks and events on medical research and public policy in psychopharmacology and psychedelic culture. Everyone is welcome! ♥

By submitting your email address above, you give us permission to process your data in a GDPR-compliant fashion.
For more details, see our Privacy Policy. 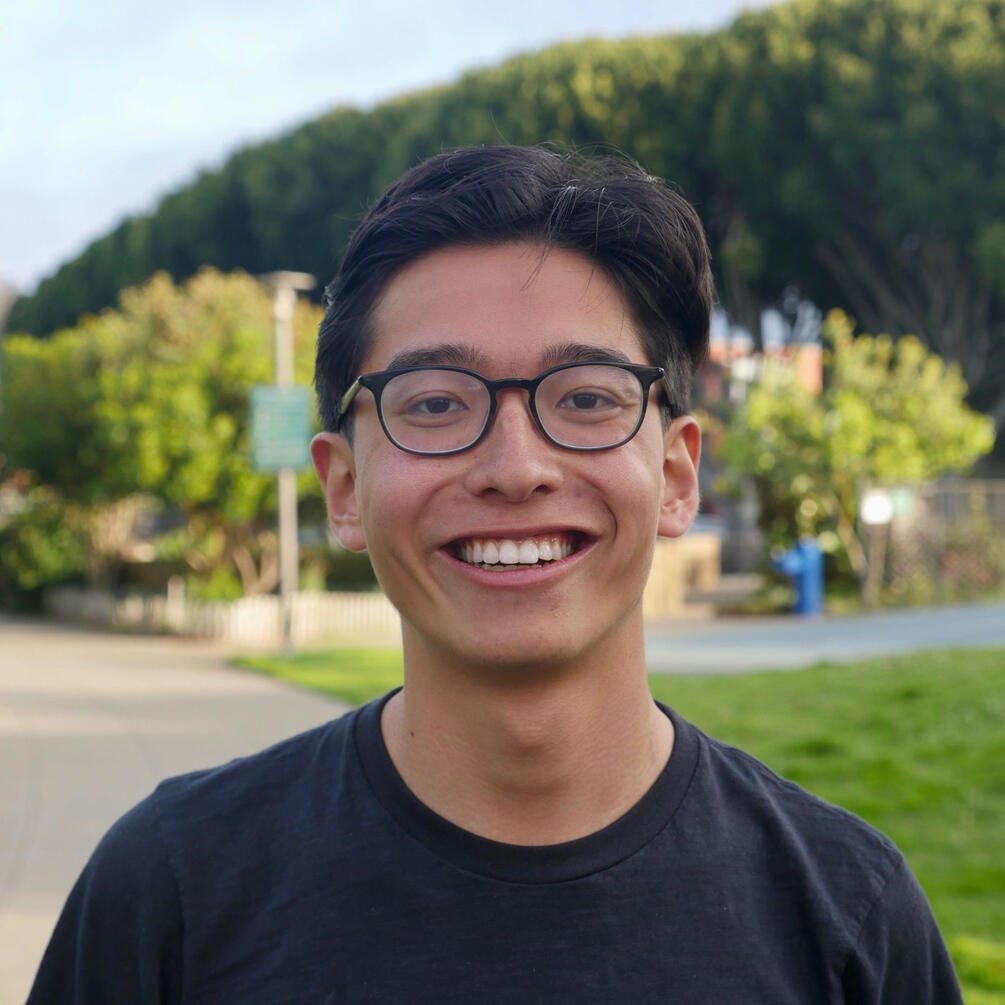 Welcome to the Oxford Psychedelics Society! We are a community of researchers, artists, and students who believe in the transformative potential of psychedelics.

Among its many remarkable effects on human consciousness, psychedelics enrich our appreciation of the interconnectedness of all things. The academic study of psychedelics also embodies the spirit of interconnectedness; it strives to integrate a broad range of disciplines, such as neuroscience, mysticism, and policy, in order to explore the highly multifaceted nature of psychedelics. The Oxford Psychedelics Society aims to be an interconnected organization; we hope to create a platform for dialogues between speakers who approach psychedelics from completely different backgrounds and viewpoints. We want to put psychiatrists in conversation with shamans; we want electronic DJs to share the same stage as psychedelic sitarists; we want neuroscientists to speak alongside people who have had direct, first-hand experiences with psychedelics. We hope that the Oxford Psychedelics Society can serve as an alternative to the Oxford Union, holding space for a greater breadth of perspectives on thought-provoking subjects that deserve more mainstream attention.

As founders and representatives of psychedelic societies across the globe, we assert that people have a basic liberty and freedom to responsibly use psychedelic substances: for healing, for growth, for fun, and for personal, collective and spiritual exploration.

We work to secure these rights in collaboration with allies within social, political and scientific institutions.

We support changes to existing national and international laws and governmental policies which would decriminalize and reschedule psychedelics, allowing for proper research and safe regulated access, to stop pushing people into clandestine practices and the risks of the black market and the penal system.

We resolve to change the cultural dialogue surrounding psychedelic substances to accurately reflect what is known, and steer it towards more productive and compassionate conclusions through education and information.

Like mushrooms emerging after the rain, the global network of psychedelic societies is rising up as a public forum and voice for all the people who appreciate psychedelics. 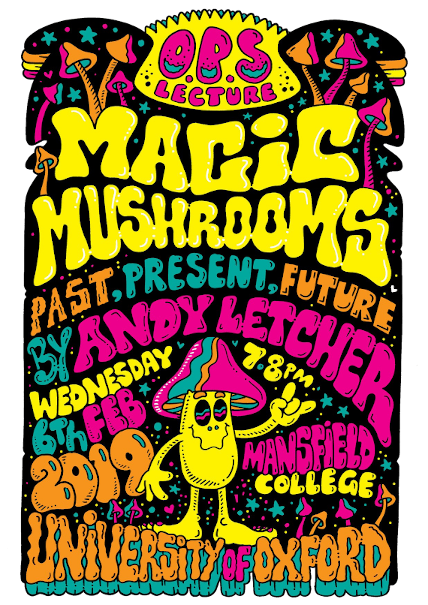 We organise talks about the effects of psychedelia, medical applications and policy. We had the honour of hosting exciting speakers in the past:

Throughout the academic year, we organise social events such as social gatherings and movie nights. Everyone is welcome!

Our biggest social event yet took place in June 2019. We organised the first OddBall, an alternative to the traditional college ball. A visionary summer celebration of the wondrous, the paradoxical, even the totally impossible. We had a fantastic day at the Isis Farmhouse, with art, workshops, fantastic costumes, and music. OddBall is a feast for the senses in the spirit of psychedelia, offering an opportunity to step out of everyday time and into an alternate world of possibilities. For more info see theoddball.org.uk. 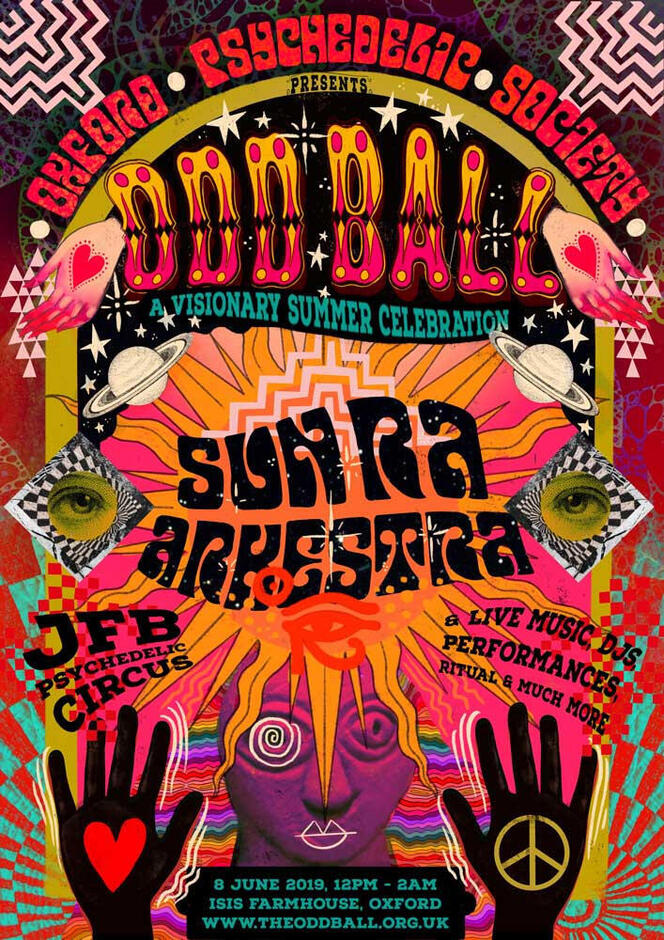 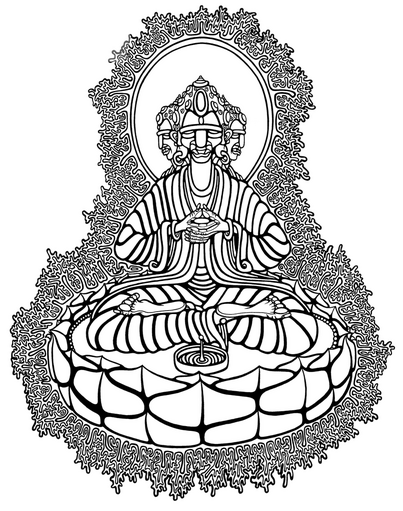 We organise healing events such as Psychedelic Breathwork or a Cacao Ceremony. These events are more spiritual and have led to some amazingly wholesome experiences.

Show your OPS love! We have psychedelic T-shirts, sweatshirts, buttons and posters. Our merchandise is proudly designed by one of the UK's most famous psychedelic artist Pinky Vision. We usually sell them after our events, and have a subset available in our webshop. Do get in touch if you're interested! 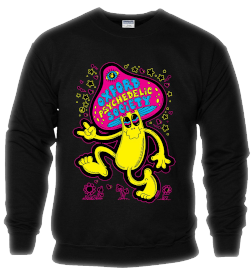 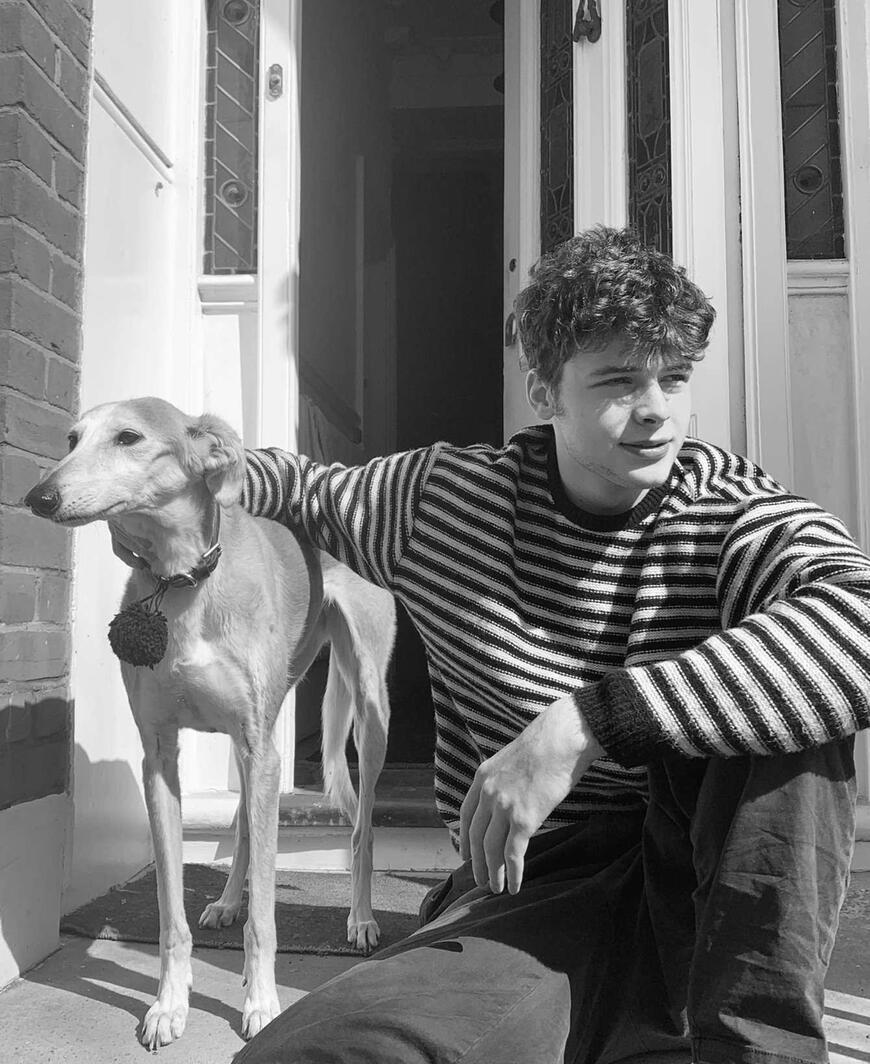 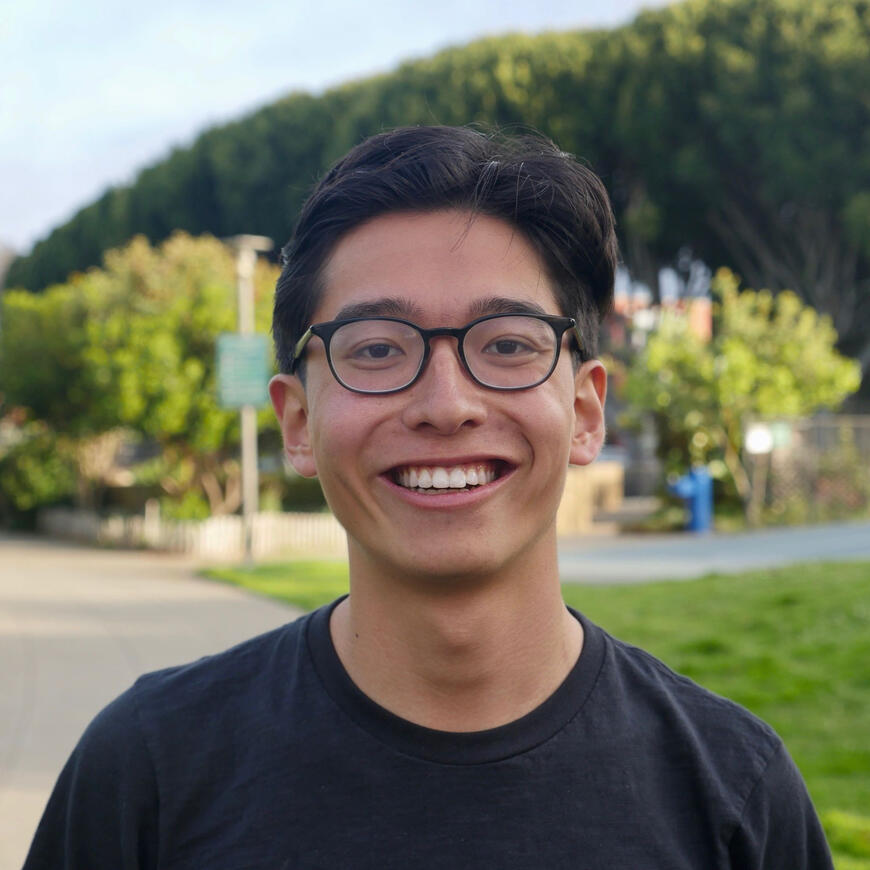 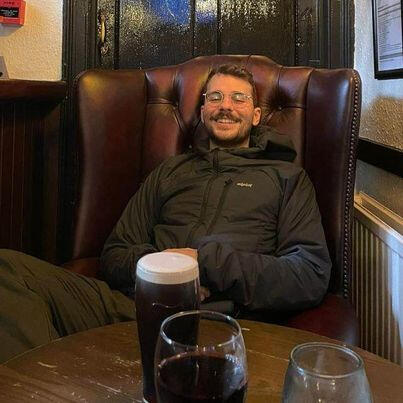 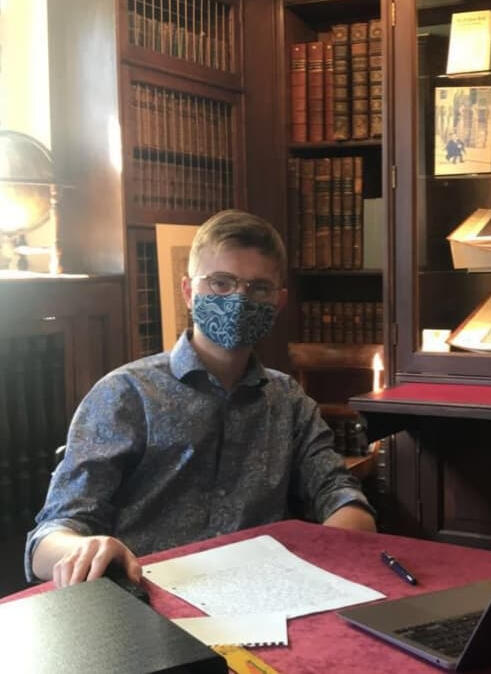 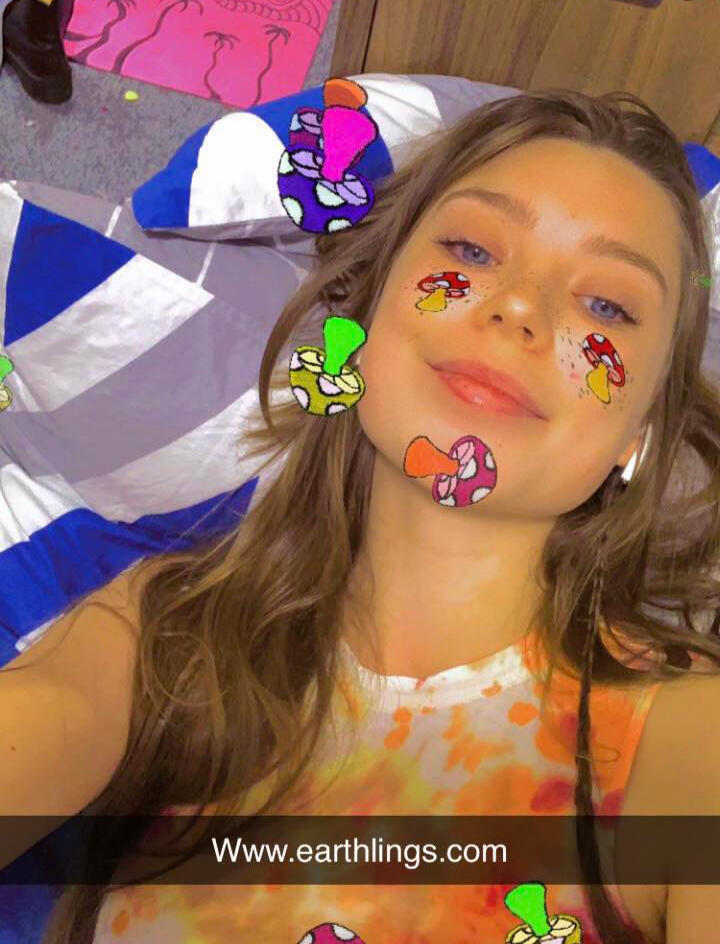 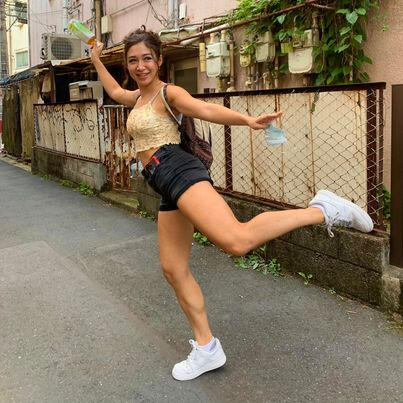 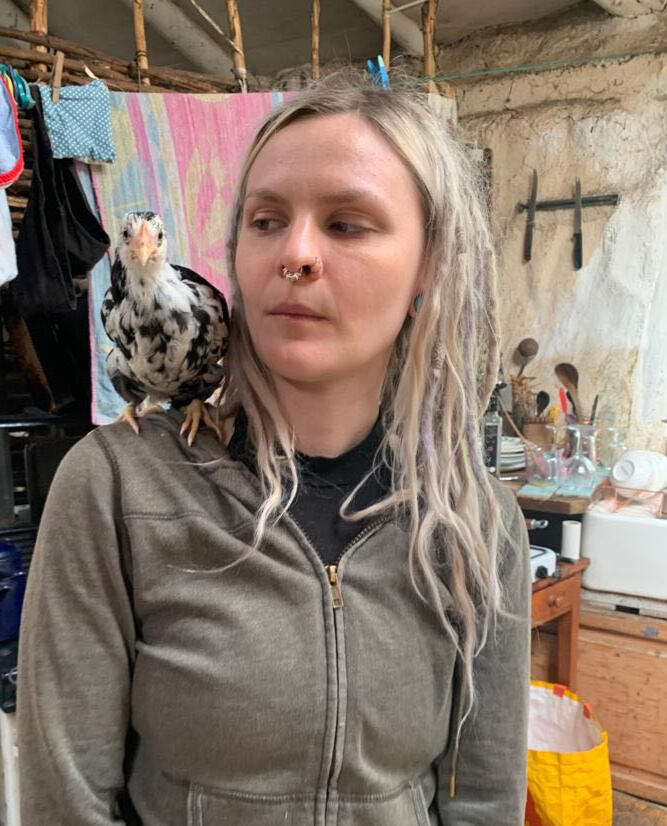 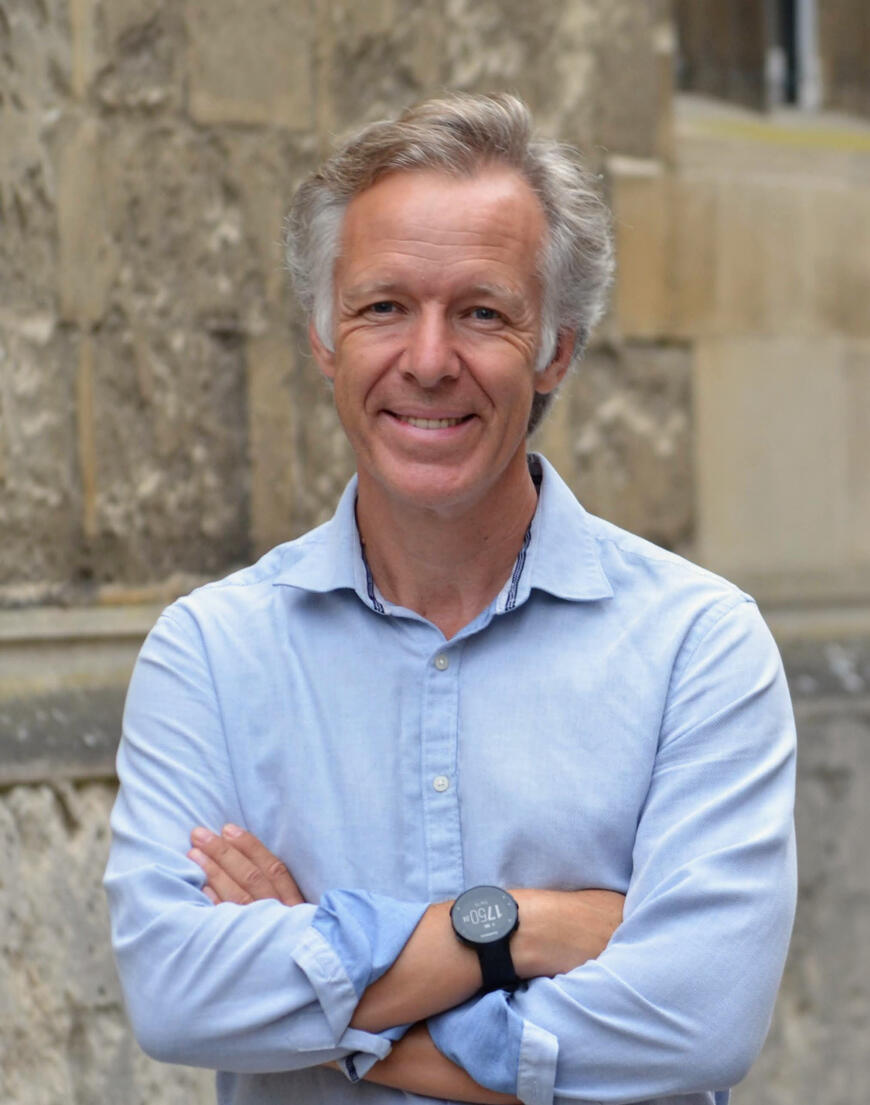 Guy Goodwin is a professor at the Department of Psychiatry, University of Oxford. His research interests include, among many others, the therapeutic potential of psychedelic drugs.

Check out this video of Prof Guy Goodwin talking about how LSD was discovered, why it became illegal and how psilocybin can help treat depression: "Psychedelic Drugs in Psychiatry". 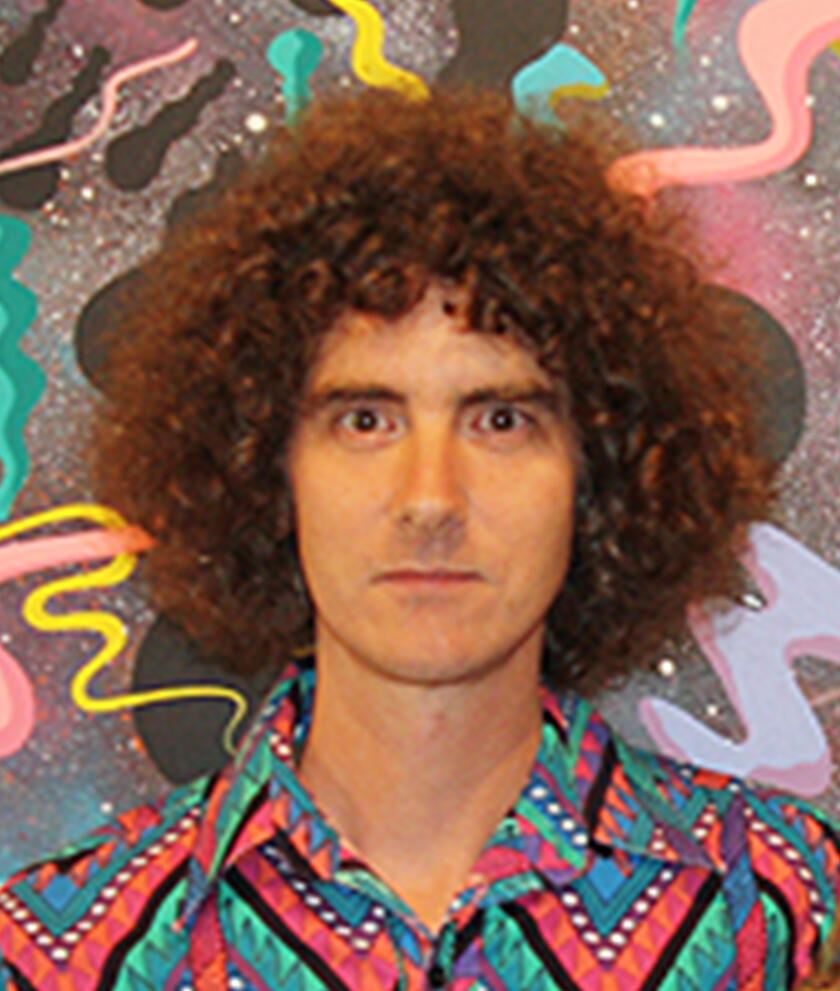 Pinky Vision is a UK-based psychedelic artist, and we couldn't be more thrilled to have him as honorary member! He describes his art as "a surreal world where psychedelic skulls grin at radiating suns, apples go electric and owls get high". Most of the psychedelic art around OPS such as lecture posters and our amazing merchandise are designed by him. Learn about his art on his webpage pinkyvision.com. 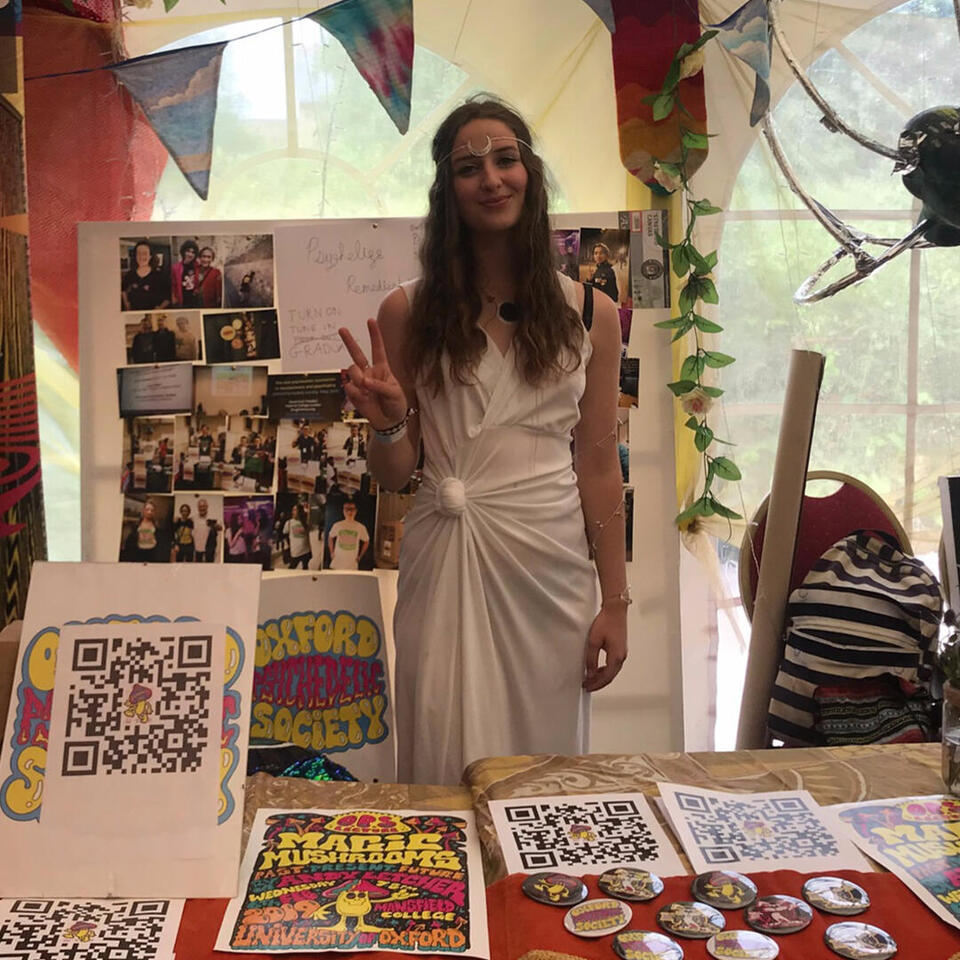 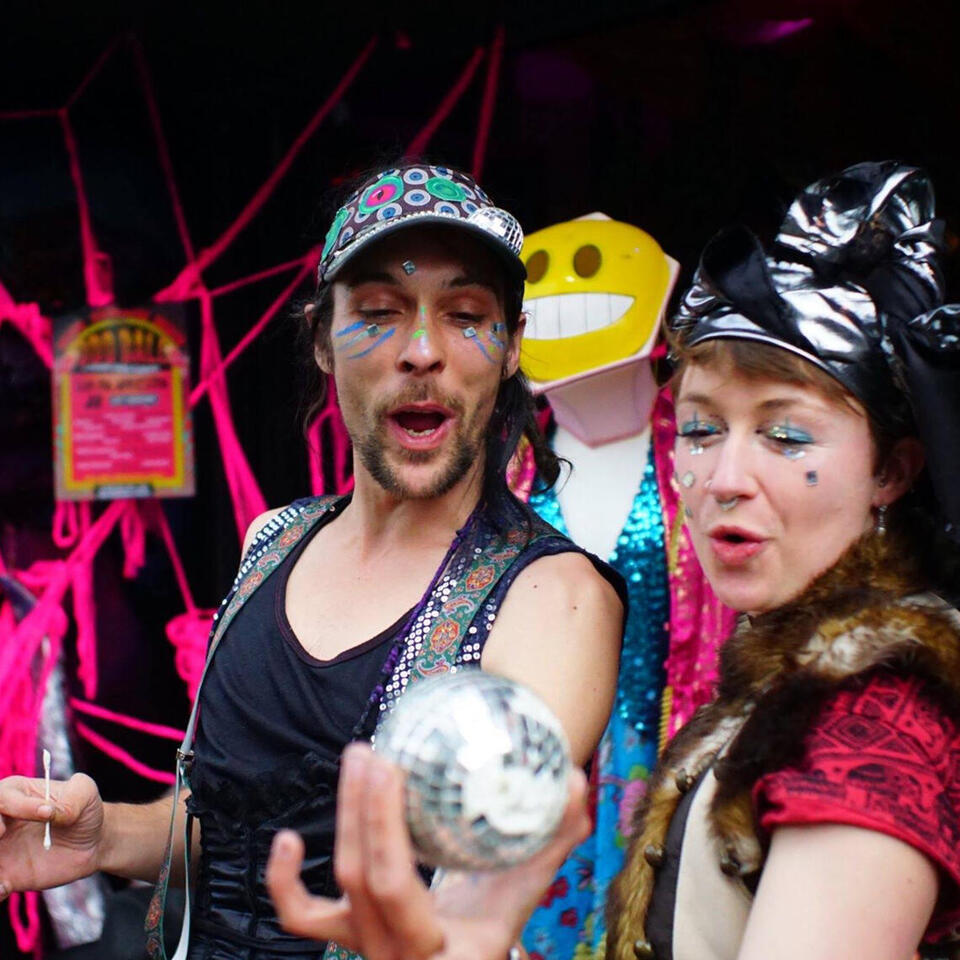 OddBall Launch Party at The Bullingdon 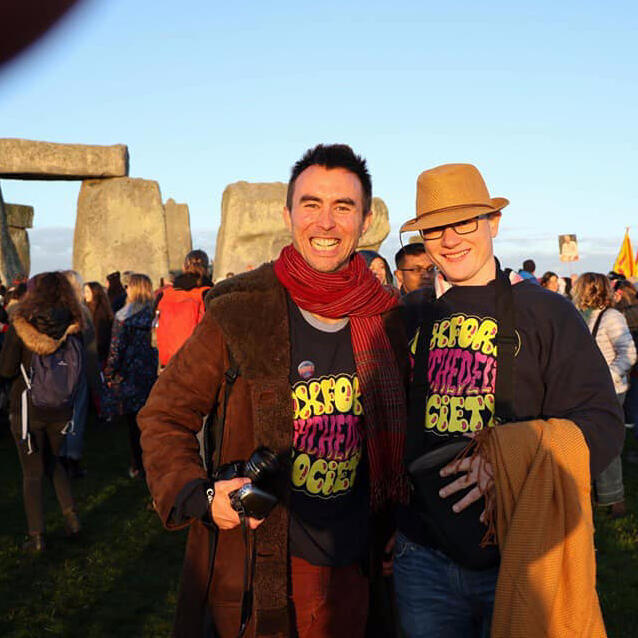 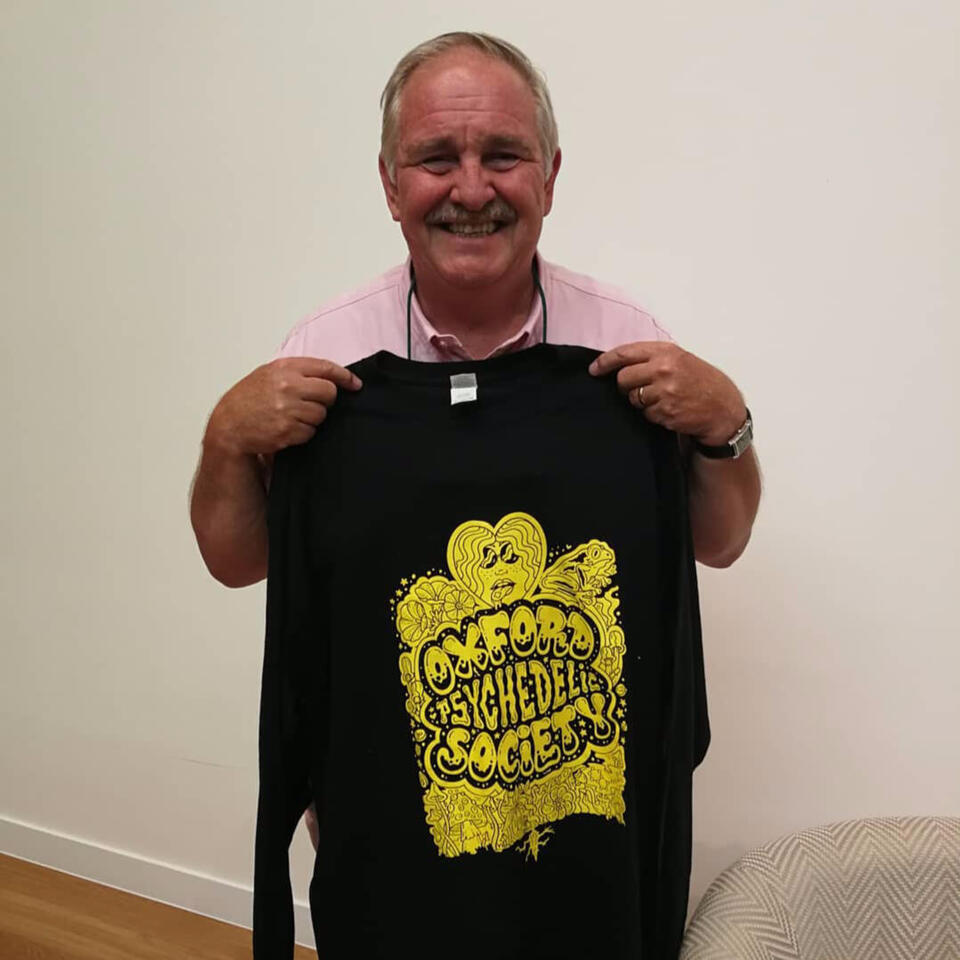 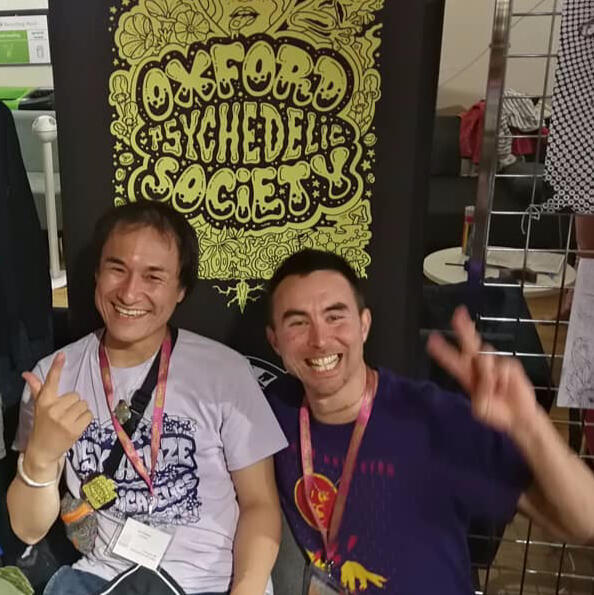 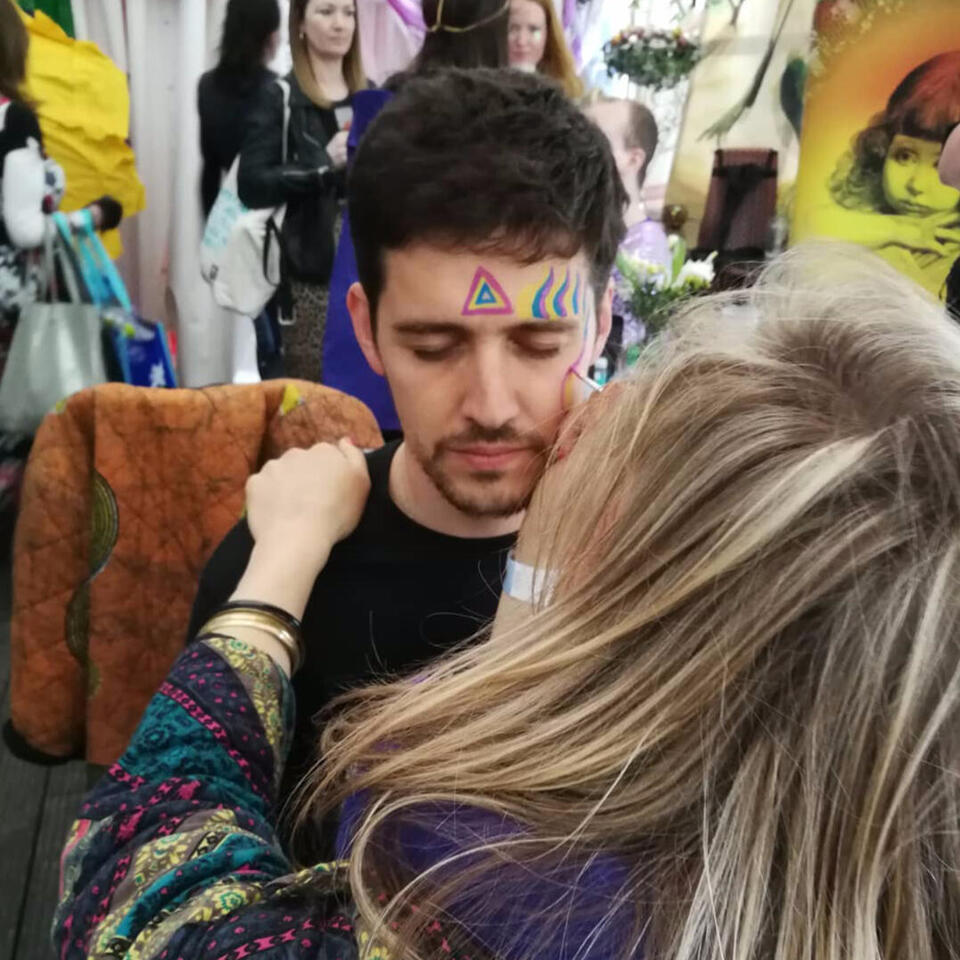 As a student-run society, we rely on donations for ensuring the continued organisation of talks, events, and spreading of our message within the wider community.

If you like what we do and would like to support us, please consider donating to us via PayPal or BTC. 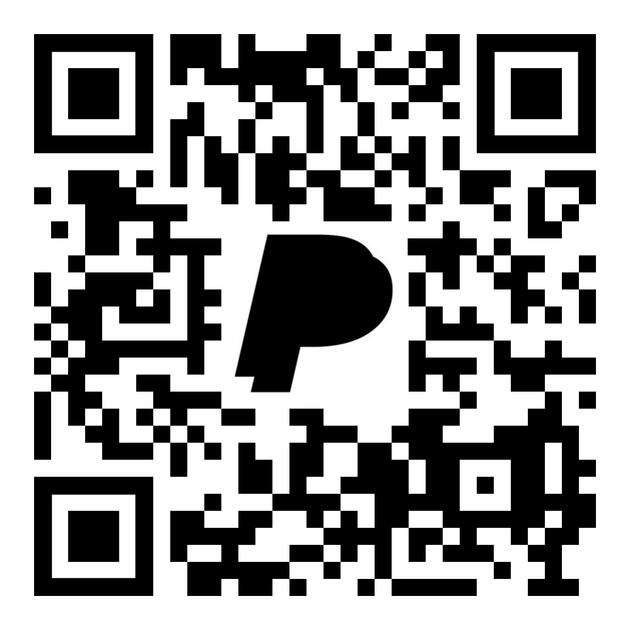 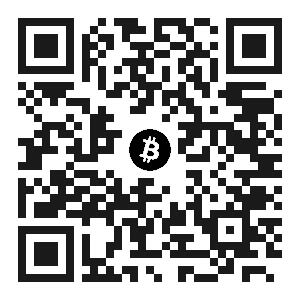 This is a repository of the talks and events OPS has done in the past. To see everything contained here in a list format, please click the button on the right.

The Curious Tale of The Fly Agaric Mushroom

There is now considerable interest both within academia and in mainstream culture about the therapeutic and transformative potential of the so-called classical psychedelics, most especially psilocybin and the mushrooms that produce it. Amidst all this excitement, a distant fungal cousin, the Fly Agaric Amanita muscaria, has gone almost unnoticed. Unmistakeable with its dramatic red and white-spotted cap, the Fly Agaric is if not exactly psychedelic then provocatively psychoactive. Its effects are capricious, ranging from visionary ecstasies through to increased stamina, optical distortions, muscle twitches and a coma like sleep. Largely shunned despite its legality in the UK, the very idea of it has nonetheless had a profound cultural impact, from its discovery by Western travellers to Siberia in the seventeenth century through to the present day. No other mushroom has generated so many myths.

In this talk, Dr Andy Letcher discusses the chemistry, effects, history and cultural impact of this strange, eldritch mushroom. He introduces and questions many of the stories that swirl and circulate about it with giddy regularity. Did Siberian shamans drink mushroom-infused reindeer piss to get high? Was Jesus a Fly Agaric mushroom? Had Lewis Carroll been chomping them when he wrote Alice in Wonderland? And is the red and white figure of Santa Claus actually a mushroom shaman bringing gifts from the Upper World with his flying reindeer?

Dr Andy Letcher has doctorates in Ecology (from the University of Oxford) and the Study of Religion (King Alfred’s College, Winchester). He is a Senior Lecturer at Schumacher College, Devon UK, where he is the Programme Lead for the MA Engaged Ecology. His research interests focus on the contemporary use of psychedelics with a particular interest in the discourses by which people frame their experiences and by which those experiences become meaningful. He is currently researching ritual and animistic usage of psychedelics by contemporary British Druids. He is the author of numerous papers on subjects as diverse as environmental protest, animism, fairies, the revival of the Heathen lyre, and the distribution of mammals across continents. He is the author of Shroom: A Cultural History of the Magic Mushroom. In a quest for homegrown acoustic dance music (ADM) he plays English bagpipes and Dark Age lyre.

Plato claimed that the unexamined life is not worth living, and to examine life surely we must explore awareness itself? Over two millennia later Timothy Leary compared psychedelic drugs to the telescope in terms of their capacity to reveal hidden aspects of our minds. As psychedelic experience struggles to break free of the Drug War paradigm how can we integrate psychedelic use within our existing institutions and culture? While suitably distanced research work on psychedelics is increasingly acceptable, personal engagement with these substances often isn't. From mainstream medicine to academia and to politics - everywhere psychedelic substances are the teacher that dare not speak its name.

Join us for an evening with psychonaut, occultist and writer Julian Vayne to explore these issues. Julian was recently banned from addressing students at the University of Oxford because of his involvement with psychedelic drugs. He is the author of Getting Higher: The Manual of Psychedelic Ceremony and sits on the board of the Journal of Psychedelic Studies

The Curious Tale of The Fly Agaric Mushroom